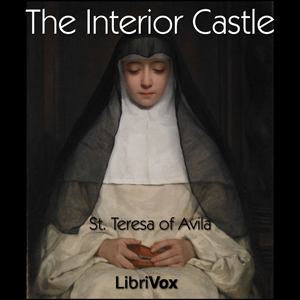 by
St. Teresa of Avila

LibriVox recording of The Interior Castle, by St. Teresa of Avila.

El Castillo Interior or Las Moradas (trans.:The Interior Castle or The Mansions) was written by Saint Teresa of Ávila in 1577. After being ordered to write her autobiographical La Vida de la Santa Madre Teresa de Jesús (The Life of S. Teresa of Jesus), Teresa was hesitant to begin writing again on her views of the perfection found in internal prayer. In the hands of the Inquisition at that time, her Life was commonly believed to be the weight in the scale of whether to call her experiences heretical or not. Her humility and claims that, “I am not meant for writing; I have neither the health nor the wits for it,” almost prevented Teresa from composing The Interior Castle. However, according to a letter written by Fray Diego, one of Teresa’s former confessors, Teresa was finally convinced to write her book after a she received a vision from God. Diego wrote that God revealed to Teresa,

"...a most beautiful crystal globe, made in the shape of a castle, and containing seven mansions, in the seventh and innermost of which was the King of Glory, in the greatest splendour, illumining and beautifying them all. The nearer one got to the centre, the stronger was the light; outside the palace limits everything was foul, dark and infested with toads, vipers and other venomous creatures."
With that, Interior Castle was born. It contained the basis for what she felt should be the ideal journey of faith, comparing the contemplative soul to a castle with seven successive interior courts, or chambers, analogous to the seven heavens. Teresa's consumption of chivalric romances as a child subsequently influenced such imagery, which is prevalent in many of her mystical works. It is also not unduly speculative that living in a walled city like Ávila must have influenced her thinking. The concept of an "interior" life is still important in Spanish thinking in the twenty-first century.

An English translation was published in London in 1852.
(Summary from Wikipedia)